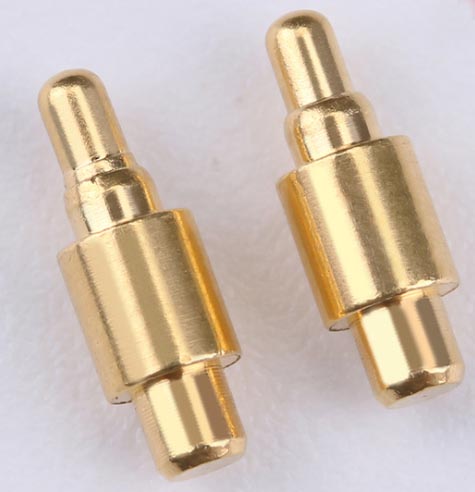 Cnomax Pogo Pin Factory can customize spring thimble according to customers' needs. When customers require high conductivity, we need to increase the current of spring thimble. We can achieve large current of spring thimble through design and processing. The MOST COMMON METHOD IS TO PUNCH THE NEEDLE AND ADD COATING TO THE SPRING THIMBLE. The gold plating of the spring thimble is not only to enhance the current size of the spring thimble but also to enhance the performance of the spring thimble.
High-current Pogo pin have the following characteristics:
1, high current Pogo pin long service life: because the spring thimble surface coating of high current is thicker than the ordinary coating, the original connector electroplating can prevent the connector from being corroded by oxidation and vulcanization in the working environment, play a protective role on the connector, prolong the service life of the connector. The service life will be extended after increasing the electroplating.
2, high current spring thimble stable performance: the electrical coating on the connector surface can improve the ductility, durability, wear resistance, and combining ability and other mechanical properties of the connector. The electric coating on the connector surface can stabilize the connector impedance, so that the connector electrical performance is more stable.
3, the spring thimble of the large circuit has strong wear resistance: the electroplating on the surface of the connector can be separated from the harmful substances in the environment, which not only reduces the damage to the connector, but also increases the wear resistance of the connector.
4, high current spring thimble working performance is strong: high current spring thimble connector surface electroplating, not only play a protective role on the connector, on the other hand, improve some aspects of the performance, electroplating is the protection of the normal use of the connector. Some CONNECTOR manufacturers are now looking for more stable coatings that allow connectors to work.
large Current Pogo PIN Background Technology:
1. The invention relates to a Pogo PIN which can transmit a large current.
2. The usual Pogo pin is pressurized through the end of the probe supported by the spring, because of its instability, the probe is slightly tipped and leads to a part of the probe is connected with the outer cylinder, and, as mentioned above, the electrical channel between the probe and the outer cylinder is formed. For example, in the Pogo pins at both ends up and down to form a probe (upper probe and lower probe), electrical path by upper probe - outer barrel - lower the path of the probe, and, due to the dumping of probe can contact between the probe from the outer barrel, therefore, previous Pogo pin contact impedance dispersion is bigger, inevitably lead to larger contact impedance, thus, It is difficult to transmit large currents.
3. In order to solve the above problems, deformed Pogo pins or joint pins of various structures are developed, and it is necessary to develop a Pogo pin that can not only maintain or improve the physical characteristics of stroke, spring force, integration (miniaturization), durability, stability and other electrical characteristics, but also have ultra-large current or ultra-low impedance.
4. The above describes the problem points and topics of the previous technology, and ordinary technical personnel in the technical field of the invention are not self-explanatory to the above problems and technical problems.
Technical implementation elements:
5. Invent the technical problem to solve
6. The purpose of the present invention is to provide a Pogo pin with better electrical characteristics without losing the physical characteristics of the Pogo PIN, or a Pogo pin with improved physical characteristics without losing the electrical characteristics.
7. Another purpose of the invention is to provide a Pogo PIN with a simpler manufacturing process and a lower cost.
8. Technical solutions to problems
9. According to a Pogo PIN of an embodiment of the invention, a Pogo pin is used as an overlarge current forming a sliding outer cylinder 40 having a spring 30 with built-in elastic support probe, which guides the probe, the probe includes: The small diameter part and the large diameter part, the large diameter part is connected with the small diameter part, the outside diameter is larger than the small diameter part, and is located inside the outer cylinder 40, and comprises a sleeve 20,10', which includes: A cylindrical joint fixed to the large diameter part of the probe and a plurality of brushes extending from the cylindrical joint and in elastic contact with the inner surface of the outer cylinder 40 and sliding.
10. In the Pogo PIN, the probe and the sleeve are made by processing plate material, and the sleeve is formed by processing plate material thinner than the probe.
11. In the Pogo PIN, the sleeve is made by processing a flat plate material, and the contact surface of the brush which is in elastic contact with the inner peripheral surface of the outer cylinder 40 is a side plane of the flat material which is not derived from the truncating surface of the flat material.
12. In the Pogo PIN, the lower end of the cylindrical joint part of the sleeve is formed with a part of the punching and bending to the inside of the hanging edge 21A; The hanging edge 21A prevents one end of the large diameter part of the probe from detaching to the outer side of the sleeve 20 during Pogo PIN compression.
13. In the Pogo PIN, the probe is formed by cutting a cylindrical material, and the sleeve is formed by processing a flat material.